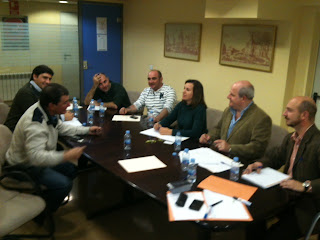 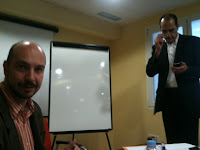 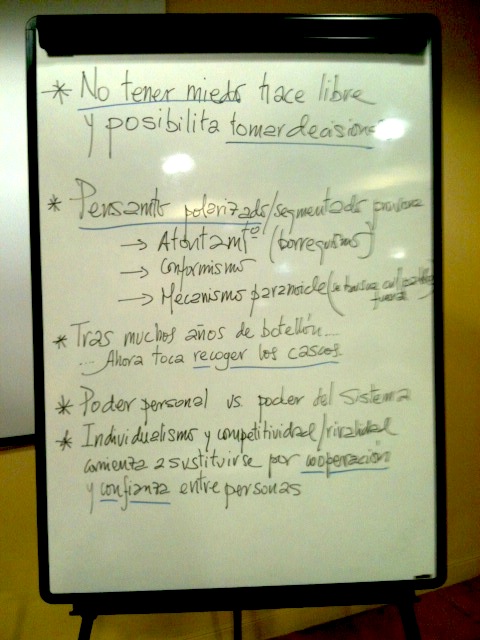 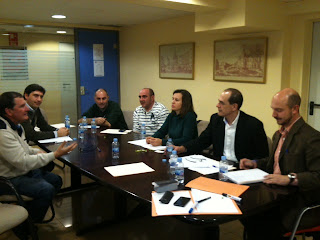 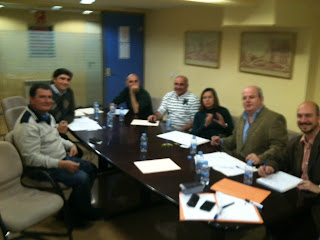 Part 1. THE SHARING OF PREOCCUPATIONS AND EXPERIENCES.

In this part of the Listening Post participants were invited to identify, contribute, and explore their experience in their various social roles, be those in work, unemployed, or retired; as members of religious, political, neighbourhood or voluntary or leisure organisations, or as members of families and communities. This part was largely concerned with what might be called, ‘the stuff of people’s everyday lives’, that relating to the ‘socio’ or ‘external’ world of participants.

At this part of the listening Post the participants shared their experiences lived as citizens during al lalong  the 2013. The beginning of this space got an intense emotional content because of the very personal experiences that some people shared.

During this time participants engage telling and listening the experiences sensations and preocupations related to the different roles that were present in the room, for example the different ages and where people came from.

In Part Two, the aim was collectively to identify the major themes emerging from Part One. From several presented these have been drawn together under the following interrelated themes:

The breach between what worries us and what occupy ourselves.

There is a feeling of big split between what we are worry about and what we really are doing about it. This seems to be related with states of mind of disconnection, lack of motivation, fear and paralyzation.

The concept of the golden jail as an image to explain why we are not decided on rebel ourselves and to risk what we have got.

There are impotence feelings located every level of the society, since the youngest people that has no work expectatives, the working class that is terrified because of possibility of loose their job and so feels anguished and frustrated, the retired people, managers and even the governments are controlled by Mrs Merkel, the FMI or the European Central Bank.

Crisis in society is confronted by a change at a personal level.

It is perceived a change in the personal attitudes towards the crisis.

It seems that there is a higher awareness of the own responsibility on each life.

There is an empowerement at different spheres of the people’s life, where as a response to the lack of authority and leadership`, individually, people takes the risk to try to change their  closer environment, tries to undertake new projects or to rebel themselves against organizations and leaders.

It is observed a dualism between entrepreunership and conformity, passion and depression.

Crisis of principles and values and the educational model.

It is clearly identified a crisis in the educational model, that is blamed of inappropiate and outdated since it supports values as the obedience, learning  by heart without questioning that are useless nowadays that the issue it is not to get access to knowledge it is to knowhow to think what to do with it.

In this part of the Listening Post the members were working with the information resulting from Parts 1 & 2, with a view to collectively identifying the underlying dynamics both conscious and unconscious that may be predominant at the time; and, developing hypotheses as to why they might be occurring at that moment. Here the members were working more with what might be called their ‘psycho’ or ‘internal’ world. Their collective ideas and ways of thinking that both determine how they perceive the external realities and shape their actions towards them.

At this part participants they gather ideas from the work done in parts 1 and 2, exploring in a collective way possible dynamics, both conscious or unconscious that could be present underlying those identified issues.

The main objective is to relate and think again in depth those issues but in a more internalized and personal way, looking for an explanation for those dynamics and social movements.

What it is intended is that  the group should use  their internal world as a tool for the comprehension of how we perceive the external world and why we react in those ways.

The breach between what worries us and what occupy ourselves.

This phrase in the group was embraced with enthusiasm because it engage with many of the paradox about what we feel and think and  what we finally do.

At every level in the society there are perceived many situations of injustice, corruption, disappointment, lack of motivation and anguish. All these perceptions worries ourselves.

Young people can´t see a  future  in our society barely can aspire to find just a precarious job that could satisfy their basic needs in the Maslow´s pyramid, nevertheless it seems that they find impossible to transform their worries in actions that could bring change.

Managers and workers live with fear and impotence their relationship with work, where everyone feels that has not any capacity to take decitions and has no power to change anything, and as a consequence becomes alienated, disconnected and stuck  to those things that are the compensation of pertaining to the welfare society even when these feelings coexist with the fear and  anguish to loose everything and the fear to be expelled from the system.

Governments lives with impotence and preoccupation the odd of having to assume policies ordered by external agents as Mrs Merkel, the European Central Bank or the Monetary International Fund.

It does exist  very deep feelings of frustration, anguish and impotence within ourselves related to the external reality that we are living, so the disconnection, the isolation, the lack of implication and motivation are defensive mechanisms used against the possibility of rebelling oneself and take the risk of making changes that you can´t control and could risk what actually structures our lives.

Crisis in society it is confronted since personal level changes.

The perception of corruption, misgovernment and the manipulation of the main institutions of our society, has undermine and invalidate them, destroying the containment and protective  function that they hold in the social system.

Our institutions worked as a kind of provider father that in return for submission and infantile acceptance offers the expectation of taking care and safety.

The institutions responded to models that were born from ideologies and needs of the XIX and XX centuries, but they have been uncapable to adapt and to respond to the needs rising from the globalization processes, the technological revolution and the social webs communication.

The resistance to change can be seen when the different governments set up new norms and regulation trying to suppress the capability of the people to express themselves and to rebel to their decisions.

Mistrust to institutions and organizations and the reaffirmation of the individualism it occurs at many levels in our society, since the intimacy of the families, the enterprises, the basque and catalonian independentist movements and even the states with their will to remain independent and don´t let being intervened by international agencies, or assume openly their rebellion as Iceland did.

The disorganization of the systems of social containment has generated feelings of mistrust, isolation and paranoidism towards the institutions of our system. This has produced a movement of personal and collective  empowerment that didn´t exist before, nevertheless this confidence in what is personal and individual limits their own possibilities of change, because it hinders any kind of leadership and doesn´t accept any dependency and implication on any group or social movement.

Crisis of principles and values and the educational model.

At these times there is the sensation of having lost values and principles that were originated by from the main ideologies of the XX and XIX century. In Spain we think that we have done a political transition but hasn´t been accompanied by a social and educational transition.

Now there is clearly a sensation that the socioeconomic system is collapsed and that re we have to remove it, but there is no idea towards what model go, what to do, how and with which goal.

Individually or at a small group levels initiatives and changes can be observed but they lack of the strength  or capacity to make changes in broader social spheres.

The education seems to condensate the social worries about the the crisis of values and principles and brings the need to find new principles and tools for building a different new society.

The ancient and present educational models have been blamed for the difficulties to change a model that promotes dependency, individualist, not to critical, where thinking  and team and cooperative work, ethic and self-assured is not intended.

The new objective is to reach an educational model where the personal  and societal capabilities could be developed in such way that there would not be the dependency on structures and planifications that could not be useful facing the rapidity of the social, technological and environmental changes but could offer certainty and confidence to the persons and the institutions.

On the education is projected the explanation of the current problems, just like the solution to the problems in the future related to what are principles, values, culture and the needed capabilities to build a better society.

This projection it could be a defensive mechanism against the difficulty to find new values and principles that guide the changes that could be affordable at the present.